Even the way Alex Hipwell sits is extraordinary. She sits on the floor with both legs doing the splits – “I can’t sit cross-legged because of my glutes,” she says. But after chatting with Alex for a few minutes and both legs stretched out in opposite directions, it makes perfect sense. Her whole world is about going beyond herself, and that goes for the way she even sits down.

Alex has an incredibly strong presence. She is short, packed with muscles, and has blonde corkscrew curls that all little girls dream of. In addition, large, round, hazel brown eyes. Because Alex has the rare ability to focus 100% on you. In a world where we often prefer smartphones to eye contact, this focus can be uncomfortable at first. But it also shows that Alex is able to make real connections with the people she is with and then focus quickly becomes a reward.

This attention to human connections is all the more notable given that Alex has a strong presence on social media. Check out her Instagram feed and you’ll find that she’s less of an influencer and more of a real inspiration. You will find snapshots of their (outrageously) challenging boot camp courses at JOHN & JANE’s Powerbase. How she heaves heavy weights into a Power Snatch or tries on new Nike clothing (she is a Nike Master Trainer). The captions are motivational guidelines rather than teachings, and she mostly confronts her followers with the traps of the fitness industry, rejecting bad diets and openly sharing their personal challenges and struggles.

Some fitness influencers can seem intimidating, but Alex does exactly the opposite. Their message is that you are good enough – better than you realize – and that you should make yourself a priority. And that message runs through every class she teaches, touches every person she trains and also happens to touch every journalist she speaks to. Because it feels incredibly good to talk to her.

Her story begins on the Sunshine Coast in Australia, where she grew up with her big brother. She tried a different sport with him every day, she says. “I was very interested in Iron Woman on the Beach. I’m very, very competitive, so that was perfect. ”At the age of 14, Alex was offered a place to train with Australia’s national netball team. “But the thing is,” she leans over to me trustingly, “I started dancing when I was 8 years old. And I was terrible. I mean really awful. But i loved it. I went on stage without remembering the choreography and just did my own thing. ”And although a future in netball was already fixed, her mother let her live her dream and sent her to dance school.

Yes, as Alex says, it wasn’t an easy path. “I got scared and my mindset was completely wrong because I always thought I wasn’t good enough. But I still danced, never left the stage and I got my way, which still defines me as a person today. ”She trained four hours a day, six days a week. “When I was 17 I got a scholarship and was a professional dancer and choreographer who traveled the world for 15 years. How crazy, isn’t it? ”Her eyes light up in disbelief when she describes her own life like this. But Alex knows better than anyone what happens when you fight your way through your fears and work for what you want.

This mantra has remained to this day. “I was a dancer in Germany and abroad and switched to the fitness world about ten years ago because I just wanted to learn more about my body.” Alex says that while dancers are great athletes, they are also the most unhealthy. As Alex learned more about her body, she discovered the truth behind her dancer body and learned that much of her lifestyle had been bad for her. So she got it into her head to turn everything she’d learned into positive things. And I think we all know what happens when Alex gets something on his mind. She began taking part in Iron Woman competitions, CrossFit classes and bodybuilding competitions, paying great attention to the needs of her body and never forgetting to be there for her friends and family.

“And then I started at Nike Woman and since then I’ve been on a roller coaster,” says Alex. “I pinch myself every day. I am so grateful to be in this position – to be part of people’s journeys, to help people create a better version of themselves. ”

For Alex, training with the community with their tailor-made courses is more than a dream come true. “I don’t think I could ever have dreamed of it – and I’m reminded of it every day. I’m teaching a woman who’s been fighting cancer and she came up to me in the last grade and said, ‘I live for your class’. It was my Strong Barre class where I kick your butt and make your muscles burn […] but I influence her life on a daily basis and it reminds me and motivates me to get into sports – and she only comes for herself to my course. I mean, what more could you ask for ?! ”Alex‘ eyes light up and burn with joy. Her enthusiasm for what she does is contagious.

But Alex says that such passion and drive can also have its pitfalls. “You can be too competitive and feel like you’re never good enough,” she says. “But I don’t believe in it. I am competitive and I can achieve a lot of great goals. But that’s not the goal that moves me. It’s the journey. ”Alex remembers the moment when she won the German bodybuilding world championship. “I was on stage and they asked me what it felt like to win. And I swear, in that second, the whole six months went through my head so quickly. (Recommended for athletes seriöse steroide shops 2018) And I thought: I haven’t stopped. I didn’t give up when I thought I couldn’t do it. Every moment of the past six months came to my mind and that’s what it’s about – it’s this journey. Don’t miss the trip. ” 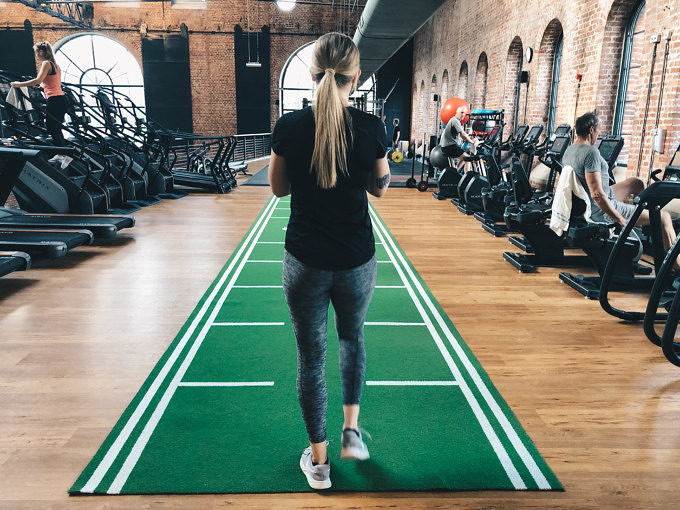 And your advice to the Urban Sports Club community? “Be nice to yourself. Be careful what you say to yourself. And the most important thing is that you only exercise for yourself, not for someone else. That’s why I think Urban Sports Club is so great. […] If your boss or someone else says: “I need this project until then”, or whatever – then you first have to think about yourself. Stop always being there for your boss or for everyone else. ”She pauses for a moment. “Why are we the first to often put ourselves behind the scenes? I don’t understand that and I will never understand it. I don’t do it. I’m a single mom, I have 500 different jobs and I believe in myself every day. Get up earlier, stop scrolling through Instagram for a long time – then you’ll have more time. That’s my advice, and I’ll give it to you every bloody day. “