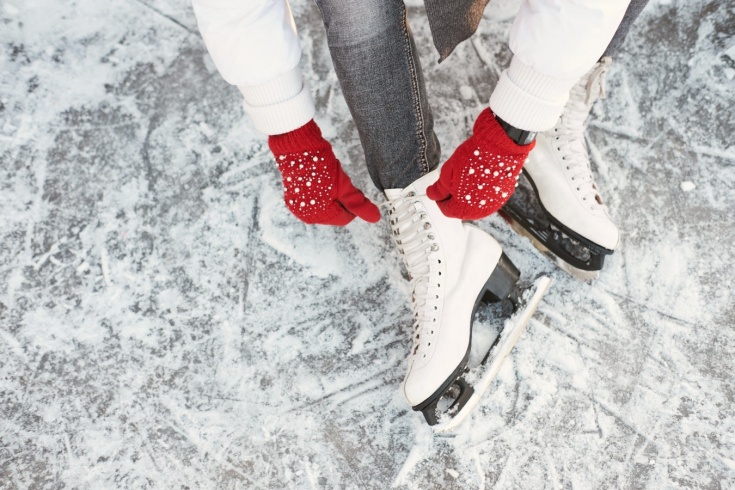 It’s a wintry morning in Lankwitz, a quiet suburb in the southwest of Berlin. The air is clear and cold and I walk from the S-Bahn station to the Lankwitz ice rink. The streets are quiet, except for the shrill birdsong. And when I’m walking over a small bridge, I stop for a moment to take a picture. The bare trees against the pink and gold sky look like a postcard.

I am here to ice skate. I haven’t gotten this right since I was a little girl. My mother used to take me to an ice rink in south London that I honestly didn’t remember very well. It was an indoor hall, with terrible light, and it always smelled of vinegar. The skates hurt my ankles and scratched the ice as I tried to move on the ice without falling. I was always shocked at how slippery the ice rink was. We also always went there in winter when the whole train was full of children. They rushed past me while I was holding onto the gang, wide-eyed and speechless with fear.

I remember pausing like this for 5 minutes until my mother encouraged me to move. After a while I slowly got a feeling for it and was finally able to let go of the gang to slide a little awkwardly in a circle on the ice surface. So I drove around for 45 minutes, waving to my mother when I passed her. And exactly when I got the hang of it, it was time to leave and we didn’t repeat the whole trip until exactly one year later.

Somehow, I hope that this is exactly what happens today – that I immediately get the same feeling for it and buzz around the ice rink as if I had the lead role in Swan Lake. And as I approach the ice, I see that there is a lot less going on than on the ice rink of my childhood in London.

The Lankwitz ice rink is a real ice skating institution in Berlin. It opened its doors 18 years ago and has since been the scene of many events, birthdays, competitions and races. I enter the spacious changing area and go to the reception, check in with my Urban Sports Club membership and receive my skates and a locker key straight away. It’s super straightforward. I put on my skates and hobble outside to the rink. 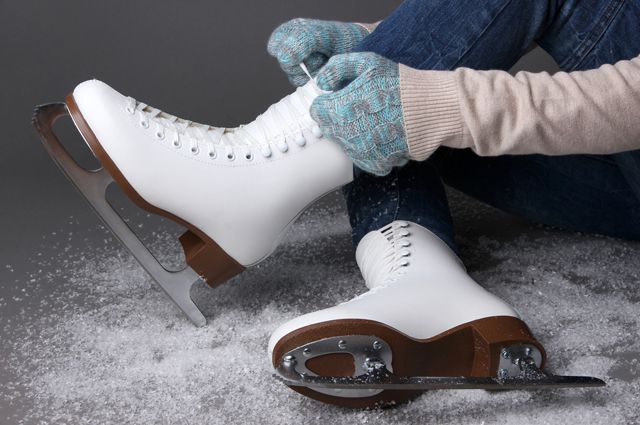 There is something naturally refreshing about an outdoor ice rink. It looks huge against the light gray sky and the white ice is light and glittering – a reminder that winter is not that bad after all. I see a coffee stand next to the ice rink and make arrangements with myself that I will treat myself to some after skating. Because even though the place is beautiful, I’m super nervous. I don’t have the same fearlessness as my 11 year old me. And although there are not many children on the track, I am afraid of being knocked over.

I step on the ice and am shocked once again at how slippery it is. I cling to the gang – just like I used to. And Liz, the photographer, shouts motivational words to me, like my mother did. I move one foot in front of the other, very slowly, trying to ignore the pack of screaming children behind me and start moving forward at a snail’s pace, but just like in the old days, I get used to the feeling of ice under my feet and start to get a little braver and drive faster. I slide in circles on the ice, but always close to the gang. But bit by bit I can move further away from it and slide freely on the ice. Past a mini ice rink where a group of adults play curling together. I watch them briefly while I gasp.

In case you’ve never heard of it, curling is like boules – players slide stones across the ice with the aim of hitting a square field. It’s a great winter sport and a great way to hang out with friends. I’m pretty absorbed in the game, but I have to keep going as the kids are walking towards me and I’m afraid they’ll knock me over.

This morning I’m getting more and more confident on the ice. With every lap I get a little faster and gradually lose my fear. Then Liz suggests that I drive to the middle of the ice so we can take photos without the gang. But that’s a little too tricky for me. So she got me a seal to help out.
By the time I finish the ice skating session, I feel fresh and super warm. It feels like I’ve had a real workout.

Later that day, I meet a friend, Ai Ling, who loves ice skating. “I think the feeling of sliding on the ice is like riding a bike – the same freedom. But I think a lot of people don’t enjoy it because of the way they originally learned it. ” Ai Ling thinks it’s because most people – just like me – have their first experiences on the ice: in a full ice rink with shoes that don’t fit properly. But Ai Ling had different experiences as a child. “I used to have private lessons and had the rink to myself,” she says. “As a kid, I was much less fearful and used to do tricks. I still have this feeling when I’m on the ice, even when there are a lot of people. I think beginners need a little more space to learn ice skating in a safe environment. ”

That also explains why I make such a mess on the ice rink. But I’m confident that with a few more sessions on the ice, I’ll be cornering just like Ai Ling. And although I had fun, my personal highlight is the hot, creamy coffee I drink afterwards.